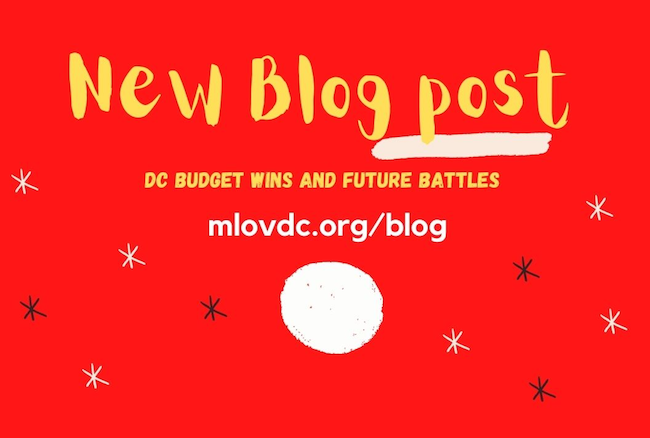 DC Budget Wins for the People, But Still More Work Ahead

Last Tuesday, Council passed the largest budget in DC history to help thousands of residents have a stable livelihood as the pandemic continues to rage. These transformative victories could not have been possible without the organized power of the people, rising up to demand that this budget reflect the needs of the most vulnerable.

On Tuesday, August 3, Council passed a budget that will help thousands of DC residents have a stable livelihood as the pandemic continues to rage. This is the largest budget in DC history, with over $400 million going to affordable housing, $41 million to excluded workers, an extension of paid family leave from 2 to 6 weeks, and much more. These transformative victories could not have been possible without the organized power of the people, rising up to demand that this budget reflect the needs of the most vulnerable.

We are especially grateful to Councilmembers Nadeau, Allen, and Lewis-George for introducing a small tax increase to fund three particularly critical programs - vouchers for the unhoused, an expanded Earned Income Tax Credit, and higher wages for childcare workers. For the first time in DC’s history, working-class families will receive a kind of basic income, as much as an additional $3600 per year paid monthly through the expanded EITC. Early childcare workers, hundreds of whom are immigrants, will also get the raise promised to them by the unfunded Birth-to-Three Act passed in 2018. We are thankful to Councilmembers Gray, Trayon White, Robert White, Silverman, and Henderson for standing alongside their colleagues and disadvantaged communities across the city in voting for the original amendment.

However, thousands of DC residents who work on the frontlines of the pandemic, keeping us safe, fed, and healthy, were denied a raise. They shoulder additional burdens - caring for their children, paying excess medical bills, purchasing their own protective equipment - while still often working for starvation wages. Councilmember Silverman proposed an important amendment to put $500 in the hands of every essential worker in DC, which failed by 3 votes to 10 to be included in the final budget. We are deeply disappointed in the 10 Councilmembers who voted against Councilmember Silverman’s amendment, many of whom also voted against the tax increase. After more than a year of performative praise for essential workers, these 10 Councilmembers had the opportunity to put money where their mouths were, but dropped the ball.

Despite these budget wins, DC’s essential and excluded workers are still suffering. As the Delta variant reignites anxiety about the pandemic and sickens thousands in DC, we are reminded that the pandemic, and especially its economic consequences, are far from over. Undocumented residents in particular remain vulnerable to countless challenges, from barriers accessing rental assistance programs to being shut out of unemployment benefits. We also need a streamlined and inexpensive licensing system for street vendors, childcare workers, and essential workers in other sectors.

To build the truly liberatory economic and political system that working class Washingtonians deserve, we will need a strong coalition of Black native Washingtonians and Black and brown immigrants of all backgrounds - in addition to white accomplices. MLOV will keep working with our union allies, nonprofit partners, and the communities we serve with to make this a reality!