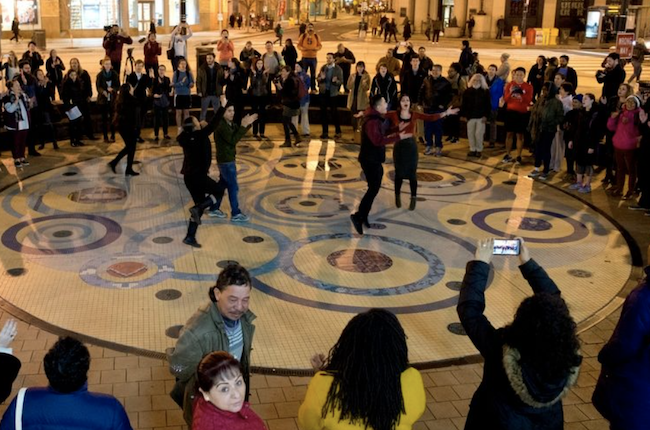 On January 25th 2017, Trump signed two egregiously violent Executive Orders that would ramp up immigrant detention, threaten the funding of safety net services for our District’s low-income communities, refuse entry to the United States for the most vulnerable refugees from predominantly Muslim countries, and place our families under even greater risk of surveillance and unequal treatment under the law.

On January 25th 2017, Trump signed two egregiously violent Executive Orders that would ramp up immigrant detention, threaten the funding of safety net services for our District’s low-income communities, refuse entry to the United States for the most vulnerable refugees from predominantly Muslim countries, and place our families under even greater risk of surveillance and unequal treatment under the law.

The same afternoon, local immigrant justice organization Many Languages One Voice held a powerful and defiant gathering called Sanctuary DC: Immigrant Community Speak Out which of over one hundred District residents poised to speak out against hatred and to remind local elected officials of the tremendous responsibility that DC has to protect all residents and make DC a true sanctuary city.  The rally also served as a public introduction of MLOV's DC Immigrant Organizing Center, as a hub for building ongoing resistance led by DC immigrant residents.

A string of multigenerational, multiethnic and multifaith immigrant residents including MLOV youth and worker members who are being directly targeted by the Trump administration, offered words of hope to the crowd as well as recommendations to local officials. As Columbia Heights community leader Ana stated in her remarks yesterday, "This is our city not Donald Trump's!”

The line-up of speakers came from many  different immigrant communities, transgender communities, Muslim communities, immigrant youth, workers and more. As Ruby Corado, the founder of Casa Ruby and outspoken local activist stated,  "I am here in solidarity with all those under attack just for existing."  Speakers broke down a wall that represented Trump and his administration’s hateful policies, brick by brick - including Hate, Police Brutality, Deportations, Muslim Registries, Language Injustice, Racism, Marked Licenses, and ICE, in a powerful and symbolic demonstration of the power of organizing to destroy any wall.

Councilmembers Robert White (D-At Large) and Brianne Nadeau (D-Ward 1) were in attendance, and Councilmember David Grosso (I-At Large) sent a representative to join the gathering.  All three offices vocally affirmed their commitment to ensure the District’s immigrants residents will not be targeted. Grosso’s office affirmed support for voting rights being extended to non-citizens and for one driver’s license for all in DC that is not marked ‘not for federal purposes’ like the current Limited Purpose License.  Earlier this week, the Council unanimously passed a Resolution to Affirm the Rights of All, as introduced by Councilmembers White and Grosso, which does include important pieces recommitting DC as a Sanctuary City including for local police to not act as immigration officers.  MLOV was present at the signing, and our ED was invited to give remarks to affirm our principles of human rights.
​
Despite repeat invitation, Mayor Bowser and the Directors of her immigrant constituent offices failed to  attend.  Instead, Mayor Bowser chose to hold a separate press conference, in which she loosely reaffirmed that DC shall remain a sanctuary city, still without a concrete plan about how she intends to replace possibly lost federal funding. Mayor Bowser also lost an opportunity to meaningfully engage with her immigrant constituents s to hear their solutions for a broad plan for sanctuary for all.

In response to immigrant communities’ repeated requests for more details on how Bowser’s administration will protect District residents from hatred, deportation, detention and surveillance, she released a statement via Twitter at the same time as the Speak Out rally affirming that local police would not do the dirty work of the federal government. While we appreciate the affirmation of local control, MLOV remains concerned at the failure to address the impunity of the Metropolitan Police Department in the shooting deaths of unarmed black and brown DC residents and the repeated emphasis solely on ‘public safety’ alone.